A key difference between Avalanche and other decentralized networks is the consensus protocol. Over time, people have come to a false understanding that blockchains have to be slow and not scalable. The Avalanche protocol employs a novel approach to consensus to achieve its strong safety guarantees, quick finality, and high-throughput, without compromising decentralization. 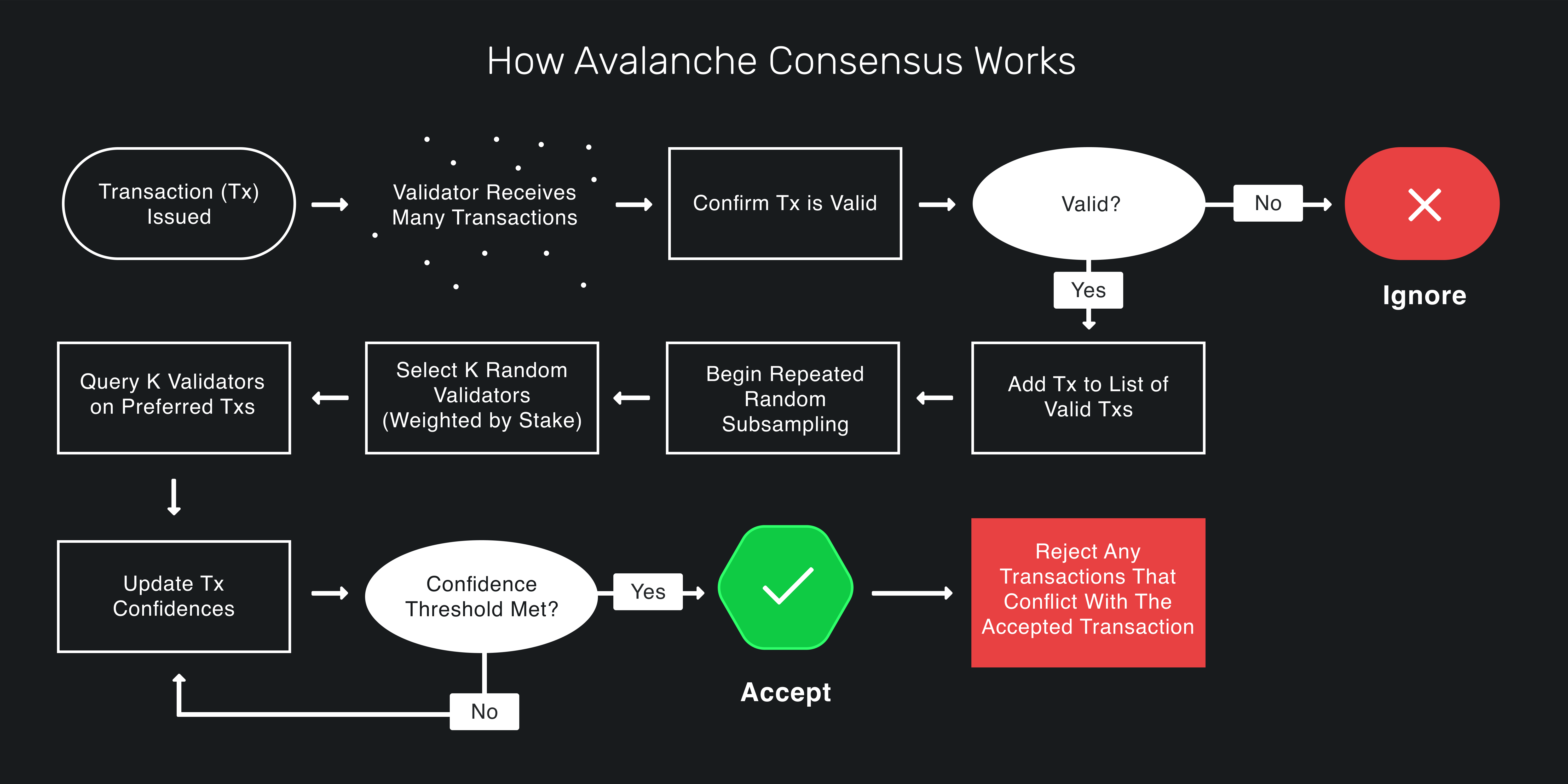 AVAX is the native token of Avalanche. It’s a hard-capped, scarce asset that is used to pay for fees, secure the platform through staking, and provide a basic unit of account between the multiple subnets created on Avalanche.

When a validator is done validating the Primary Network, it receives back the AVAX tokens it staked. It may receive a reward for helping to secure the network. A validator only receives a validation reward if it is sufficiently responsive and correct during the time it validates. Read the Avalanche token whitepaper to learn more about AVAX and the mechanics of staking.

Staking rewards are sent to your wallet address at the end of the staking term as long as all of these parameters are met.

Validators secure Avalanche, create new blocks/vertices, and process transactions. To achieve consensus, validators repeatedly sample each other. The probability that a given validator is sampled is proportional to its stake.

When you add a node to the validator set, you specify:

The minimum amount that a validator must stake is 2,000 AVAX.

Note that once you issue the transaction to add a node as a validator, there is no way to change the parameters. You can’t remove your stake early or change the stake amount, node ID, or reward address. Please make sure you’re using the correct values in the API calls below. If you’re not sure, ask for help on Discord or browse Developer FAQs.

If you’re running a validator, it’s important that your node is well connected to ensure that you receive a reward. See here.

To make API calls to your node from remote machines, allow traffic on the API port (9650 by default), and run your node with argument --http-host=

You should disable all APIs you will not use via command-line arguments. You should configure your network to only allow access to the API port from trusted machines (e.g., your personal computer.)

Why is my uptime low?

Every validator on Avalanche keeps track of the uptime of other validators. You can see the connections a node has by calling info.peers, as well as the uptime of each connection. This is only one node’s point of view. Other nodes may perceive the uptime of your node differently. Just because one node perceives your uptime as being low does not mean that you will not receive staking rewards.

The likely reason that your node is not connected to another node is that NAT traversal failed, and you did not start your node with --public-ip=[NODE'S PUBLIC IP]. In the future, we will add better monitoring to make it easier to verify that your node is well-connected.

The only secret that you need on your validating node is its Staking Key, the TLS key that determines your node’s ID. The first time you start a node, the Staking Key is created and put in $HOME/.avalanchego/staking/staker.key. You should back up this file (and staker.crt) somewhere secure. Losing your Staking Key could jeopardize your validation reward, as your node will have a new ID.

You do not need to have AVAX funds on your validating node. In fact, it's best practice to not have a lot of funds on your node. Almost all of your funds should be in “cold" addresses whose private key is not on any computer.

Follow this tutorial to learn how to monitor your node's uptime, general health, etc.

A delegator is a token holder, who wants to participate in staking, but chooses to trust an existing validating node through delegation.

When you delegate stake to a validator, you specify:

The minimum amount that a delegator must delegate is 25 AVAX.

Note that once you issue the transaction to add your stake to a delegator, there is no way to change the parameters. You can’t remove your stake early or change the stake amount, node ID, or reward address. If you’re not sure, ask for help on Discord or browse Developer FAQs.

Avalanche is the fastest smart contracts platform in the blockchain industry, as measured by time-to-finality