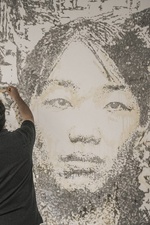 BEYOND THE STREETS presents Alexandre Farto aka Vhils digital block chain collection. Vhils started on his path in contemporary art at an early age with a fascination of graffiti and writing his name – but he was compelled to further experiment with this ephemeral act and develop a deeper pictorial language within public spaces. Through a passion for exploration, Vhils has created one of the most unique visual languages of his time, literally breaking boundaries with his bas-relief carving techniques. Vhils brings this energy into the digital space with a collection of works created with explosive charges to reveal intricate portraits on the wall, forever capturing the exact moment of transformation. From initial detonation to existence these artworks are created in only 2000 frames per second and only through slow motion capture as a digital NFT can these works exist and be experienced in this analyzed perspective.

Alexandre Farto has been interacting visually with the urban environment under the name of Vhils since his days as a prolific graffiti writer in the early 2000s. Vhils has presented his work in over 40 countries in solo and group exhibitions, site-specific art interventions and projects in various contexts – from working with communities In Lisbon, Rio de Janeiro and Shanghai to collabs with Art institutions such as the Centre Pompidou (Paris), Barbican Centre (London) , CAFA Art Museum (Beijing), MAAT (Lisbon) or Palais de Tokyo (Paris) to 104 (Paris) , among others.An avid experimentalist, Vhils has been developing his personal aesthetics in a plurality of media besides his signature carving technique: from stencil painting to metal etching, from pyrotechnic explosions and video to sculptural installations. He has also directed several music videos, short films, and one stage production. Learn More