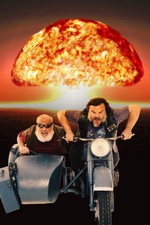 Jack Black and Kyle Gass make up the Greatest Band in the World: Tenacious D. They started playing together in Kyle’s studio apartment on Cochran Ave in Los Angeles. No one could have ever dreamed of where the band’s genius would take them, but take them it did...
The band had a variety series on HBO (1999), a feature film Tenacious D in the Pick of Destiny (2006), and an animated film Tenacious D in Post-Apocalypto (2018) accompanied by a rock album (2018) and graphic novel (2020). The duo received a Grammy nomination for Best Comedy Album for their 2012 album Rize of the Fenix and went on to win a Grammy in the category of Best Metal Performance for their cover of Ronnie James Dio’s “The Last In Line” (2014).