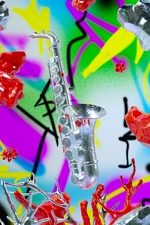 American DJ and producer GRiZ has teamed up with a digital artist from Moscow Kitasavi for a joint NFT drop. It’s gonna be an amazing audio-visual collaboration featuring 7 artworks made in colorful pallets and bold modeled shapes by Kitasavi paired with original sound by GRiZ. 4 pieces will be available at Drawing, and 3 others will be auctioned off! The creative duo has been working closely on each detail from the concept to execution. By the way, GRiZ has also contributed to the drop as a visual artist. Kitasavi’s artistic style with crazy colors and original shapes matches so well with the GRiZ’s sound.

GRiZ is entering the NFT space with “SEROTONIN BOOST,” an audio-visual collaboration with Russian artist Kitasavi. GRiZ first noticed Kitasavi’s work from an album cover he did for a mutual friend and has been looking for the right project to work on together ever since. The offering features Kitasavi’s colorful pallet and bold modeled shapes paired with custom never before heard scores from GRiZ written specifically for this collection. The pair worked closely on the concept, art direction, and execution, and are additionally offering their own individual pieces, including GRiZ’s first digital offering as a visual artist. GRiZ has been working on his own visual art for years but has largely kept it out of public view.

GRiZ, AKA Grant Kwiecinski, is the 30-year-old kid from north Detroit who grew up on a healthy diet of American funk, golden-age hip-hop, and dance music; the curious producer who first began making future-forward music during his formative years at college, only to permanently abandon the classroom for the dance floor to become a champion of the live electronic landscape. GRiZ’s live show is a spectacle unto itself, seamlessly mixing improvised saxophone, guitar, vocals, and more over booming bass lines and head-knocking drops which has taken him from bedroom start up to one of the biggest electronic touring acts in the United Sates. A shining force of positivity, GRiZ has preached his lifelong ‘Show Love, Spread Love’ mantra via his ongoing charity work and community activism. Via his annual run of GRiZMAS holiday shows at Detroit Masonic Temple, which has sold out every year since launching in 2014, and the coinciding 12 Days of GRiZMAS series, he has raised funds for music education programs within public schools across the greater Detroit area.

Kitasavi, born Nikita Savinov, is a digital artist from Moscow, Russia, who has been creating art for as long as he can remember. He received a traditional art education, has a graphic design degree, and has been working as a graphic designer for several years before transitioning to a digital artist. Merging 3D art, graphic design, photography, and sculpture, now Kitasavi creates his own abstract worlds where chaos is the only order. Organic shapes, whimsical characters, tangible textures, crazy colors, hidden easter eggs, humor, culinary and traveling references are his artistic approach.