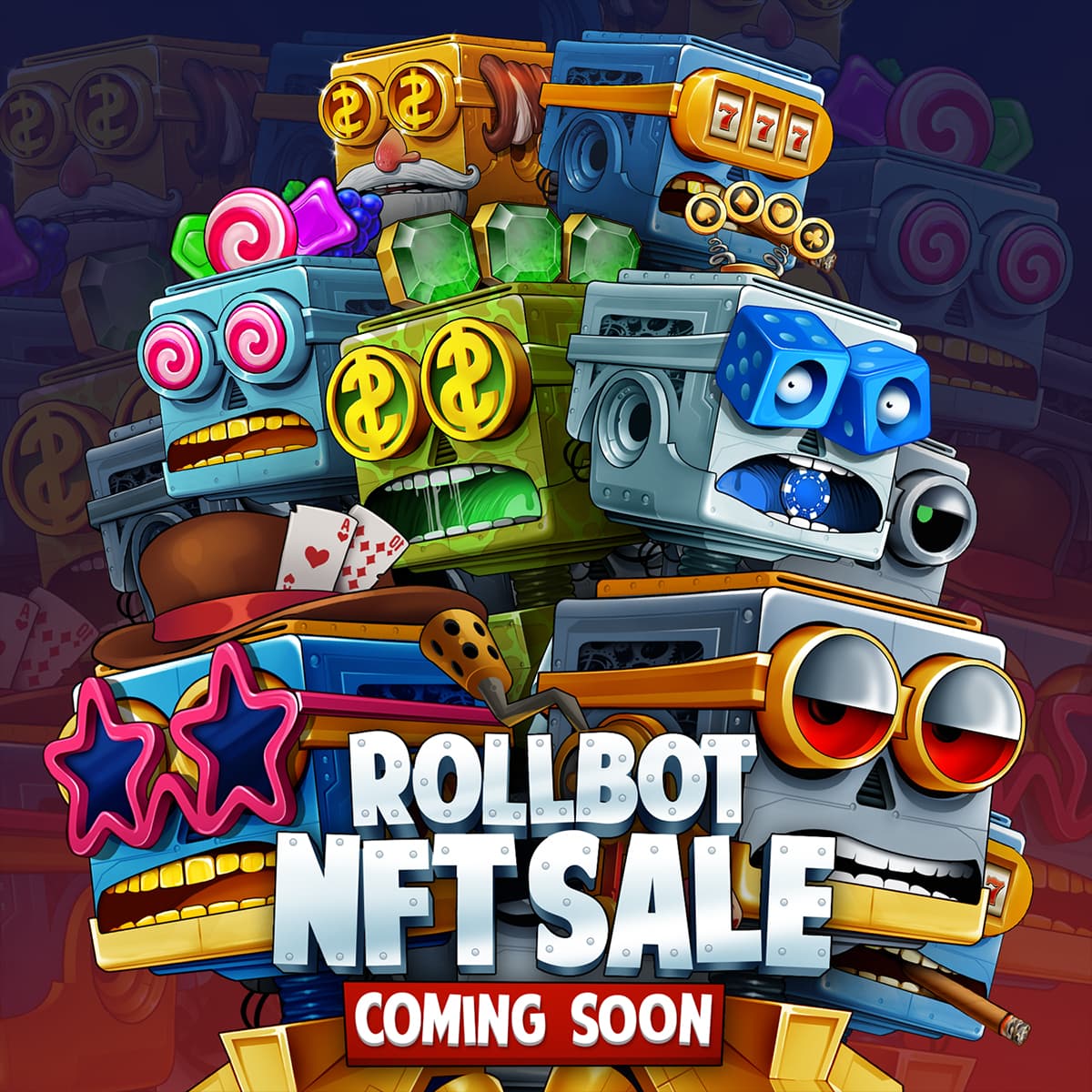 A collection of 10,000 unique robots generated algorithmically using over 120 traits with proof of ownership on the Ethereum blockchain and a focus on utility. Inspired by projects like Aavegotchi and CryptoPunks, Rollbots are based on the ERC-721 standard that underlies most digital collectible and utility projects.

Each Rollbot is a Pixar-style piece of digital art that doubles up as a personalised VIP membership card like you’d get at a regular casino. Become a Rollbit VIP by owning a Rollbot and enjoy the perks, which multiply if you own more than one!

There will be a fair distribution across two sales where each Rollbot NFT will cost $500 in the presale or $1000 in the public sale. For each sale, it will cost everyone the same to become a Rollbit VIP and own a Rollbot. The total supply will be 10,000 Rollbots, with each NFT being one of a kind. The instructions to take part in the NFT drop are detailed in the FAQs. You can also join the Rollbit Discord if you need help.

The distribution includes a presale of 2,000 Rollbots for a reduced price of $500 during the 14th of October presale and 7,000 Rollbots at a price of $1,000 during the public sale via Rollbots landing page (public sale date TBA). Another 900 can be won via provably fair NFT Rollboxes. Rollbit will keep the remaining 100 to be used exclusively for giveaways and marketing purposes.

Rollbots provide special privileges such as:

Rollbot holders can create their own Rollboxes at a 1:1 ratio. Become the house in your very own casino game with innovative NFT loot drops that can include NFTs, cash prizes, Bonus Buys or any of the cryptocurrencies that are available in Rollbit’s Crypto Portfolio feature.

Create your own Rollbox, choose whether to put your own NFTs (or include other prizes such as cash) and choose the win probability for your NFT. The team will automatically calculate a price to open the Rollbox depending on the value of its contents and the win probabilities for each item. The calculated price includes a 5% house edge that goes to Rollbit, that is shared with the Rollbox creator each time it is opened.

But since the creator sets the probability of winning the contents, it’s possible to receive the full price of the Rollbox you've created with your own items every time it’s opened. While putting your NFTs at risk, Rollboxes provide different ways to earn passive income from staking Rollbots and tokens from whitelisted collections such as CryptoPunks, 0N1 Force & Bored Ape Yacht Club. For instance, the Rollbox with CryptoPunk #4914 generated $47,850.36 for the creator from $113,145 in wagers.

Depending on the rarity of your Rollbot, you’ll automatically receive a certain number of lottery tickets for each weekly draw, but all holders are eligible to win big prizes!

A winner of the lottery will be announced every 7 days, with the prize money coming from the funds raised through the NFT sales.

Rarer Rollbots will also provide an increased rate of rakeback for their Rollbit casino and trading account. As opposed to the standard 10% for Rollbit players, those who purchase a Rollbot can increase their rakeback between 1%-10% (based on the rarity of your NFT).

The rewards program for Rollbot holders will encompass much more than the standard rewards. Other benefits for VIPs that hold Rollbot NFTs include:

Own a part of Rollbit with the exclusive Rollbot NFT drop. Join one of the largest cryptocurrency casinos and trading platforms by purchasing a Rollbit-branded NFT.