The Manning family has firmly stamped their QB legacy in the NFL history books with a combined 20 Pro Bowl selections, seven first-team All-Pro selections, six Super Bowl appearances and four Super Bowl wins. Patriarch Archie paved the way for sons Peyton and Eli with a 12-year NFL career, becoming one of the most beloved New Orleans Saints players of all time. Playing for both the Indianapolis Colts and Denver Broncos,

Peyton earned his place among the greatest quarterbacks in league history as one of the leaders in nearly every statistical passing category. The NFL’s only five-time Most Valuable Player and a 14-time Pro Bowl selection, he was selected for induction into the Pro Football Hall of Fame’s Class of 2021.

Eli made his own name as an elite quarterback with career highlights including two Super Bowl MVP honors. He played his entire career with the New York Giants and holds franchise records in numerous offensive categories. Eli followed in his father’s footsteps as a standout at the University of Mississippi and Peyton first made a name for himself at the University of Tennessee. Both were number one draft picks and went on to become among the most popular NFL players of their generation, remaining in the spotlight even following their respective retirements. 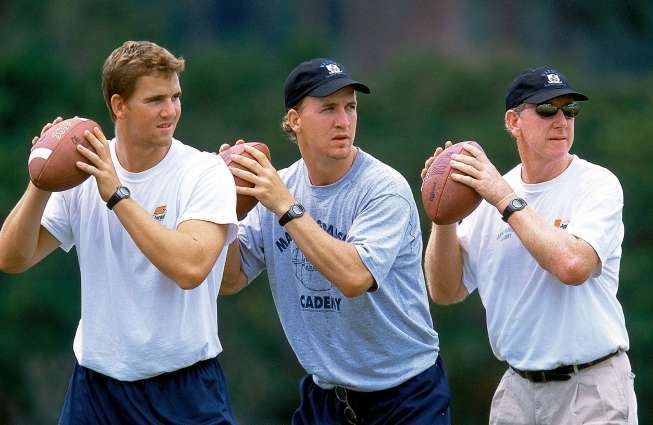 The Manning Legacy Collection is a limited-edition digital art series that will feature designs by acclaimed artists JK5 & Micah Johnson. This eight-piece collection will include open and limited-edition artwork, and one of one artworks. Four will be fine art pieces designed by visionary artist Joseph Ari Aloi, aka JK5. The additional four artworks will be animations created by Micah Johnson, former professional baseball player and renowned NFT artist, and his team (Will Hendrickson and Dean Krupka). Their series will pay homage to the Mannings’ legacy, both on and off the field.