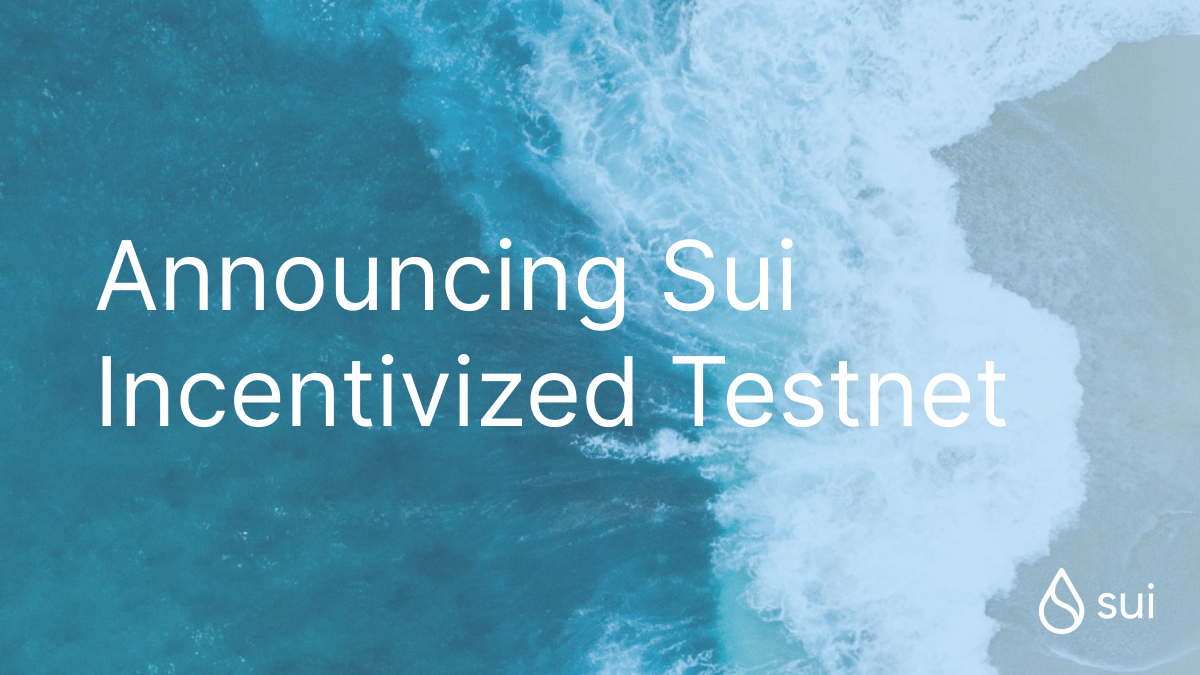 Sui is ready to announce that Sui’s Incentivized Testnet will kick off in August. This stage is the next step towards launching a secure, performant, and decentralized blockchain network.

Sui team has been hard at work since the initial announcement:

Sui’s testnet will steadily progress from the first multi-entity Sui network toward a decentralized mainnet operated by an evolving set of independent and distributed validators. The testnet will gradually introduce and stress-test the key features, mechanisms required for a decentralized, production-ready Sui network. The testnet aims to validate Sui designs, test the validator, full node, wallet, and developer toolchains, and build operational experience with a cohesive group of high-quality operators. Sui will graduate from Testnet to mainnet when the team will be fully confident in the security and performance of the software, have seen sustained operational excellence from the initial validators, and validate Sui developer experience via compelling Move-powered applications deployed on testnet.

Sui’s Testnet is organized as a series of consecutive “waves”:

Each wave consists of two challenges: a “sink” (an operational challenge) or a “swim” (a Move-based Sui developer challenge).

Here is what is known about the first three waves:

Sui’s Testnet will feature a menu of incentives to encourage and reward meaningful participation during the Testnet waves. These incentives will be available to network operators, users, developers, and other community members according to clear and well-specified guidelines. Sui Incentivized Testnet will be a learning experience that will require hard work from both the Mysten Labs team and the Sui community for success. The goal is to make the most out of the Incentivized Testnet and ensure that Sui is battle-tested and ready for mainnet.

In addition, the Sui Foundation will come live during the early waves of Testnet and become a crucial investment partner for the Sui network. The Sui Foundation’s mandate entrusts it with the mission of disseminating Sui education, promoting and bolstering use cases, applications, ancillary infrastructure and services, leading to the network’s long-term success. The Sui Foundation will achieve these goals by distributing token grants and providing developer support for users and builders of the Sui network.

Sui hopes this announcement serves the purpose of further rallying Sui’s early contributors, potential validators, developer teams, and other friends of Sui. A call to muster their fleets, unfsrc your sails and be prepared to ship, ship, ship and make Sui deliver on its promises.

As sailors might say, land ahoy! Mainnet is nigh, and Incentivized Testnet is a singular opportunity to harden Sui’s protocol, sharpen its code, and get Sui’s infrastructure cool and ready to catch those waves. Testnet is the last stage before Sui transitions into a fully-owned and fully-led community project. Be part of Sui today so that Sui can be yours tomorrow.

If you are in, please:

Sui is a smart contract platform maintained by a permissionless set of validators that play a role similar to validators or miners in other blockchain systems.

Sui offers scalability and unprecedented low-latency for simple use cases. Sui makes the vast majority of transactions processable in parallel, which makes better use of processing resources, and offers the option to increase throughput with more resources. Sui forgoes consensus to instead use simpler and lower-latency primitives for simple use cases, such as payment transactions and assets transfer. This is unprecedented in the blockchain world and enables a number of new latency-sensitive distributed applications, ranging from gaming to retail payment at physical points of sale.

Sui has a native token called SUI, with a fixed supply. The SUI token is used to pay for gas, and is also used as delegated stake on validators within an epoch. The voting power of validators within this epoch is a function of this delegated stake. Validators are periodically reconfigured according to the stake delegated to them. In any epoch the set of validators is Byzantine fault tolerant. At the end of the epoch, fees collected through all transactions processed are distributed to validators according to their contribution to the operation of the system. Validators can in turn share some of the fees as rewards to users that delegated stake to them.

Sui is backed by a number of state-of-the-art peer-reviewed works and years of open source development.

Sui Testnet is launching this August.