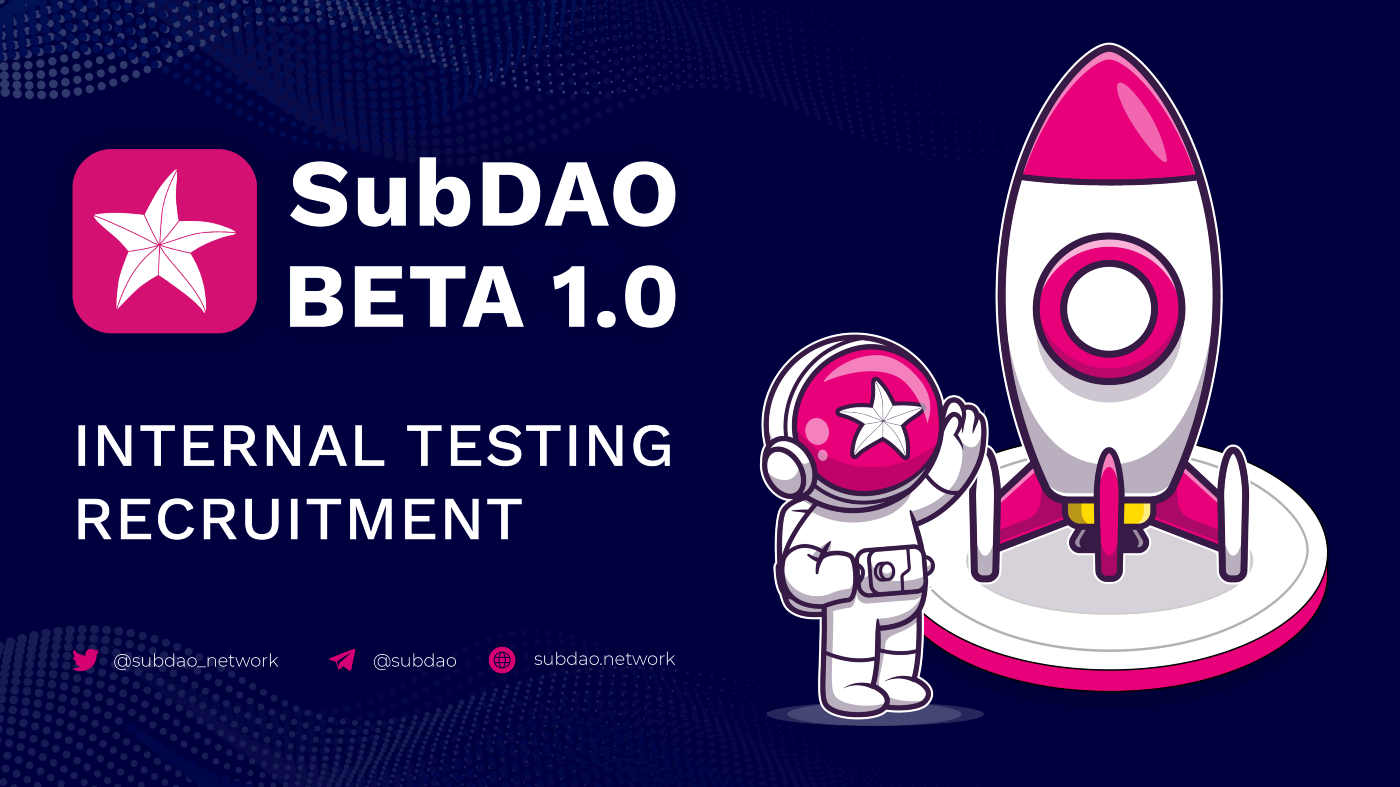 SubDAO Beta 1.0 will be launched on the Ethereum mainnet first, and the other two networks will be launched gradually during the testing period. Users can use all the functions of SubDAO Beta 1.0 on the Ethereum mainnet. However, because some protocols integrated by SubDAO (such as Aave Protocol) are not compatible with other networks, and the replacement protocol has not been decided yet, some functions are temporarily not supported on the Moonbeam and BNBChain mainnet.

Before the official launch, in order to test the smooth operation of the SubDAO Beta 1.0 system and further consolidate the security,  the project invites you to participate in the Ventures DAO Beta Internal Test activity and share the $13,000 reward.

There are limited spots available for this event. Fifty internal testers will be selected for early access to the upgraded SubDAO Ventures DAO Beta. The team hopes but is not limited to that you are a crypto native, a technical coder, and a newcomer curious about the blockchain. Please fill in the form with your experience and contribution, and the team will review it.

The task of this beta test is to experience Ventures DAO Beta, find possible bugs, and make valuable suggestions. Of course, the bonus will be tied to the difficulty of the bugs you find and the usefulness of your suggestions. Details are as follows.

Epic: If a bug is considered valuable after evaluation by the development team, it will be classified as Epic and awarded 800 USDT. (1 in total)

Crash: A bug that causes a breakdown of the SubDAO Ventures DAO system and affects the use of the functionality. The ability to reproduce a bug that is below the epic level was evaluated by the development team and classified as crash level, and was awarded a bonus of 400 USDT. (3 in total)

Critical: Affecting normal use, high-frequency operation, and high recurrence rate. After a comprehensive evaluation by the development team, it is classified as a serious bug and awarded 300 USDT. (5 in total)

General: Affecting normal use, medium frequency operation, and high recurrence rate. After a comprehensive evaluation by the development team, it is classified as a general bug and awarded 200 USDT. (8 in total)

Minor: Low-frequency operations that did not affect the normal use of the SubDAO Ventures DAO system, which can be repeated, were evaluated by the development team and identified as minor bugs and given a bonus of 150 USDT. (10 in total)

Note: It is not a system bug, and the newly added optimization function points are determined as valuable optimization after a comprehensive evaluation by the technical team, and 100 USDT will be awarded (14 in total)

USDT rewards will be issued within 5 working days after the announcement of the winning results, and the details will be disclosed on the official channels.

SubDAO is a multi-chain DAO protocol. It allows any decentralized organization to swiftly create and manage DAOs. We are committed to serving as a Web3.0 entry by providing blockchain-based digital agreement signing, DAO social networking, asset management, and other tools and services.

The founding team of SubDAO is composed of the former Technical Team leader of the IBM Group and many early well-known developers from Polkadot. SubDAO has completed multi-million dollars financing from dozens of institutions including Hypersphere, Huobi Ventures, OKEx Blockdream Fund, as well as investment by Messari founder Ryan Selkis.

SubDAO Beta 1.0 deployment is in progress and expected to be deployed first on Ethereum, Moonbeam, and BNBChain. After being polished by the technical team and passing the security audit of Slow Fog Technology, finally, SubDAO Beta 1.0 will be tested on the main network.