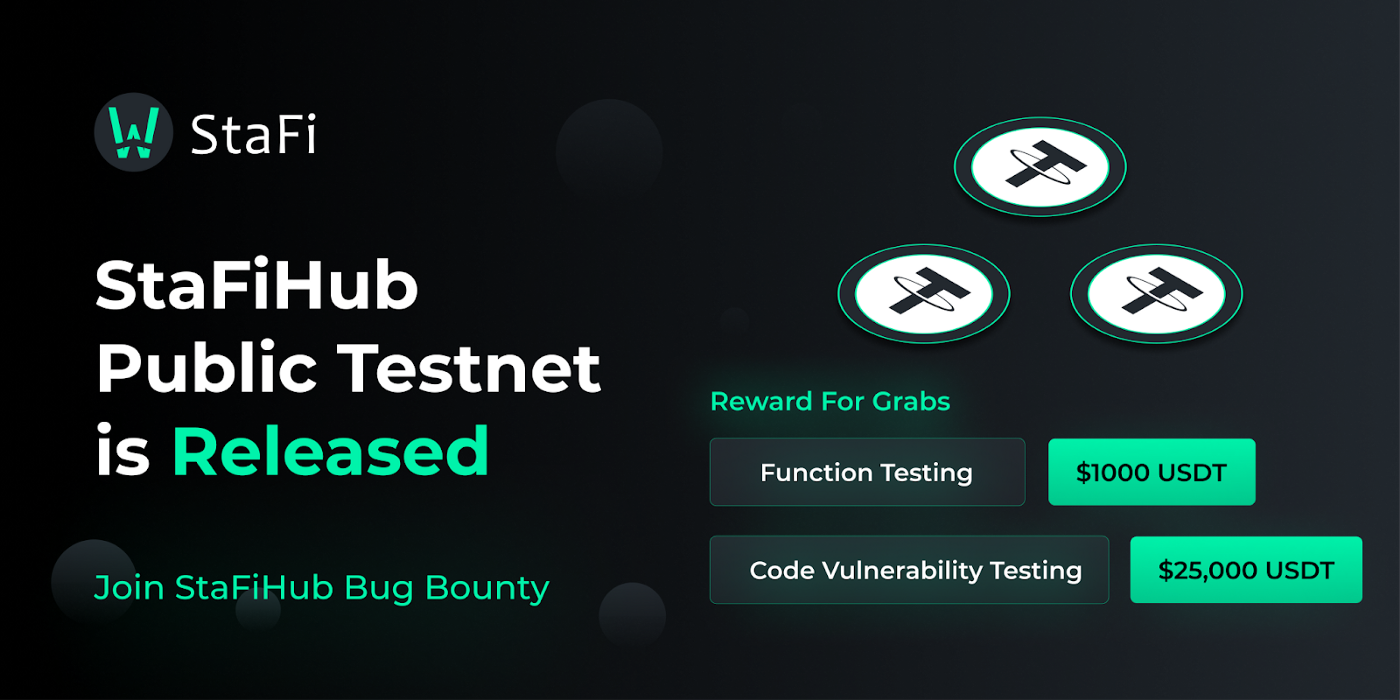 It is developed by the StaFi team and based on the Cosmos SDK to serve the Liquid Staking Derivatives in the Cosmos ecosystem. Meanwhile, it’s the first crucial step taken by StaFi to expand into the increasingly prosperous Cosmos ecosystem. Once StaFiHub is launched on the mainnet, the projects based on Cosmos SDK can quickly deploy their own liquid staking solutions with StaFi rToken SDK.

StaFiHub has the following features:

Now StaFi is excited to announce that StaFiHub public testnet is live: https://test-app.stafihub.io/, the StaFi team welcomes all users and developers to participate in the testing. StaFi has also prepared incentives as bounty rewards for any user or developer who detects and reports bugs and vulnerabilities.

For a detailed introduction to the StaFiHub proposal solution, please check this link.

StaFiHub public testnet will be divided into the following 2 phases which will be released step by step:

Phase 2 will be released around 3 weeks after the release of StaFiHub public testnet Phase 1. After the public testnet, c will release an incentivized testnet of StaFiHub for the community to participate soon. Please stay tuned for the details.

The contract of StaFiHub will be audited by a professional third-party agency and StaFiHub is approaching them. StaFiHub will synchronize it with the community as soon as there is some new progress. At the same time, StaFiHub is also launching the Bug Bounty for StaFiHub to the StaFi community. The aim of this program is to find functional vulnerabilities and code bugs with the help of the community. The bounty starts on 19/04/2022 and will always continue. Here are the details of this Bug Bounty.

Welcoming community members with development expertise to join in the 2 different phases of StaFiHub testnet. You can submit any functional and code bugs that have not been found yet and provide suggestions related to StaFiHub after completing the testing and code review of StaFiHub testnet. Please explain the bugs and suggestions in detail, and send an email to [email protected] with the corresponding screenshots while submitting.

The StaFi team will evaluate and confirm the functional bugs. On successfully reporting bugs/issues, users will be awarded rewards worth 10 USDT to 1000 USDT.

Moderate: Defects that do not affect the function, non-security issues, including room for optimization, performance improvement, etc.

Low: Unimportant issues, some minor issues that can be modified during updates, such as modifying text or notes.

Outside the scope of the bounty program:

The bounty will be issued in the form of FIS, and the amount will depend on the severity of the bugs found.

In addition to severity, the bounty amount will be determined (but not limited to) by other factors including:

When you find a bug(s), please send a report to: [email protected].

Please include your name, email, company name (optional), description of the bug(s), your opinion on what is the potential impact of that bug on StaFiHub, and how you discovered that bug.

StaFi is the first DeFi protocol unlocking liquidity of staked assets. Users can stake PoS tokens through StaFi and receive rTokens in return, which are available for trading, while still earning staking rewards. rToken is a synthetic staking derivative issued by StaFi to users when users stake PoS tokens through StaFi rToken App . rTokens are anchored to the PoS tokens staked by users and the corresponding staking rewards. rTokens can be transferred and traded at any time.