The Polymesh ITN genesis block will be live by March 30, 2021, but the chain will not be accessible until April 13, 2021 when team turn on key user interfaces, including Token Studio, Governance, Staking, and notably, Onboarding. Unlike many other blockchains, Polymesh requires all actors to verify their real-world identity during the onboarding process in order to interact with the chain.

Much like how a Proof-of-Stake blockchain divides rewards between users and operators, the Running with the Bulls reward pool will also be divided.  Polymath is recommending that once mainnet is live, the Polymesh Governing Council (GC) distribute 10,000,000 POLYX from the Network Treasury to the following groups:

Once mainnet is live, a Polymesh Improvement Proposal (PIP) will be created asking the GC to reward ITN Users and Operators. The community can show their support for this proposal through the Polymesh Governance App. Should the proposal pass, the Polymesh GC will reward POLYX based on each Users and Operators proportional points accrued over the course of the event. Polymath further recommends that any POLYX rewarded by the GC be done in bonded form, such that the POLYX is non-transferable and can only be used to secure the network via staking. Should a user wish to transact the POLYX, they will need to send an unbonding transaction in accordance with the protocol rules.

Permissioned node operators are one of the aspects that makes Polymesh different from general-purpose blockchains. As a chain built for regulated assets, Polymesh only allows permissioned capital market participants that meet specific criteria to author blocks.

During the ITN, node operators will need to make themselves identifiable in order for stakers to optimize their staking decisions and for Polymath to provide marketing outreach and support.

Operator nodes will receive rewards proportional to the total number of blocks they produce during the testnet period. This means they need to follow the rules of Polymesh by staying responsive, maintaining uptime, and avoiding equivocation because if they’re offline for periods, or if slashed, they won’t be producing blocks.

In order to get started, every user will be able to receive up to 100,000 ITN POLYX via the bridge.  ITN POLYX has no value and is only used to participate on ITN.

Instead, users compete for points, which are only for gamification purposes and accrued based on transparent on-chain activity. The points are non-transferable, and have no intrinsic value.

Points are based on specific actions that users can perform on-chain. Users can accrue points everyday by staking, while other actions have caps for how many times they will accrue points for each user. The base actions listed below will be available throughout the Running with the Bulls ITN, but additional monthly and weekly special missions will be dropping on a regular basis—so be sure to pay attention.

Base action points allocation is as follows: 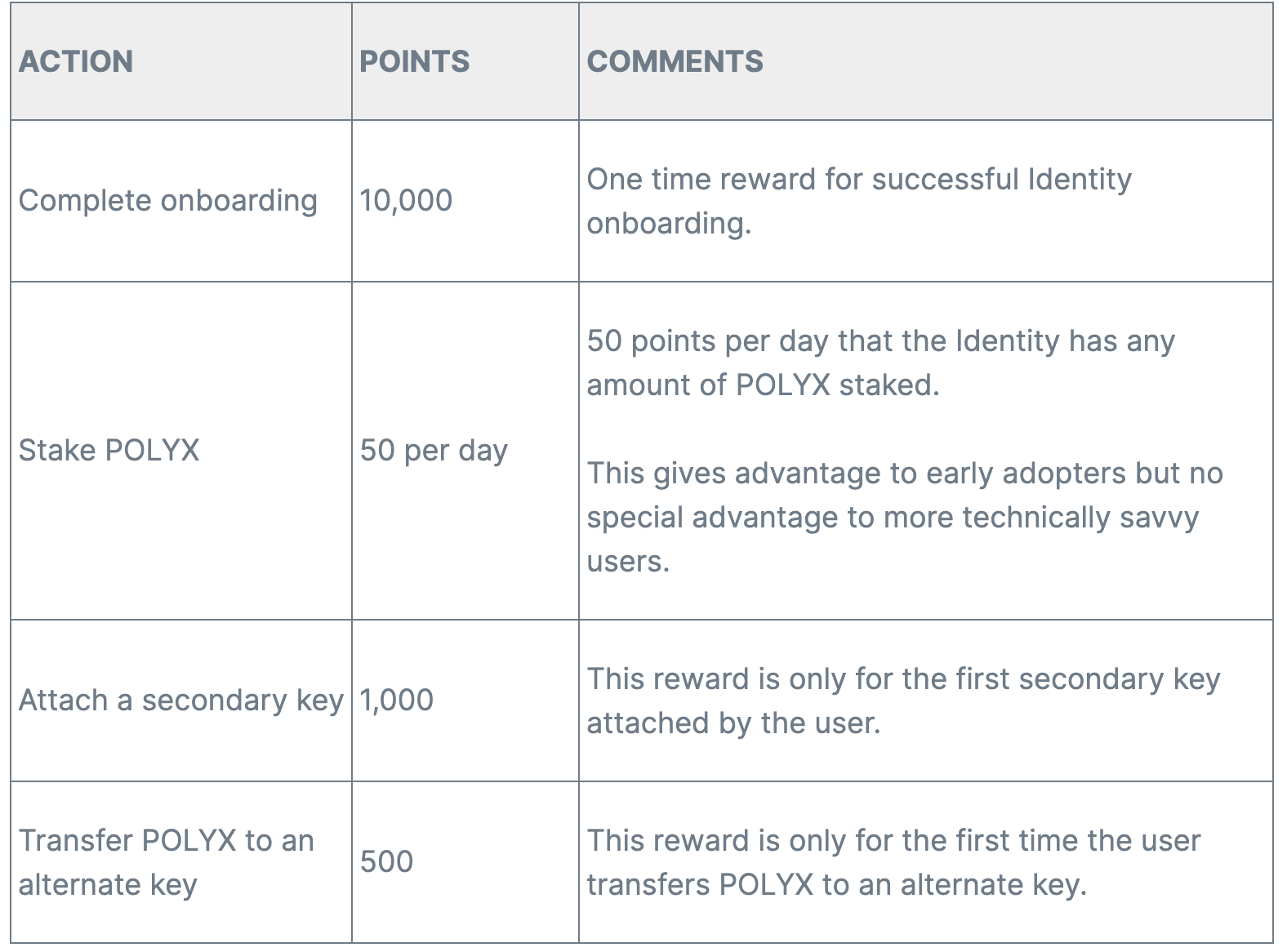 Solutions, for testing purposes, can be built and deployed on the ITN, exactly as they would on mainnet and will be able to migrate over smoothly once mainnet is live. However, unlike on mainnet, during the Running with the Bulls ITN, users will be actively incentivized to complete tasks within certain applications through the special weekly and monthly missions.

In order to use these tools and products, you’ll need a few things:

There are 5 tools that let you access the Polymesh testnet:

Begin by downloading the wallet extension and following the instructions in the wallet to create your account.* Once you set up this account, make your way to The POLY to POLYX Upgrade Bridge to kick-start testing.

Learn more about using the Polymesh Wallet to see your holdings of Polymesh-based assets, and send and receive assets.

As excited as team are to release the first wave of tools and products on Polymesh, they’re most excited to hear your thoughts on what team’ve built. There are a few ways for you to give them feedback:

A simple way to provide feedback is by filling out the quick survey that will pop-up at the bottom of the screen after you complete different actions in the POLY to POLYX Upgrade Bridge and the Polymesh Token Studio.

Additionally, in each tool, you will find a “Help” button on the bottom right of each page where you can submit any feedback or questions. Their goal will be to reply to all appropriate messages within a reasonable time-frame.

And finally, you can always email them your comments and questions here.

Polymesh Incentivized Testnet will give users and node operators the opportunity to accrue points for taking specific actions on the chain and to compete with others for spots on the leaderboard.