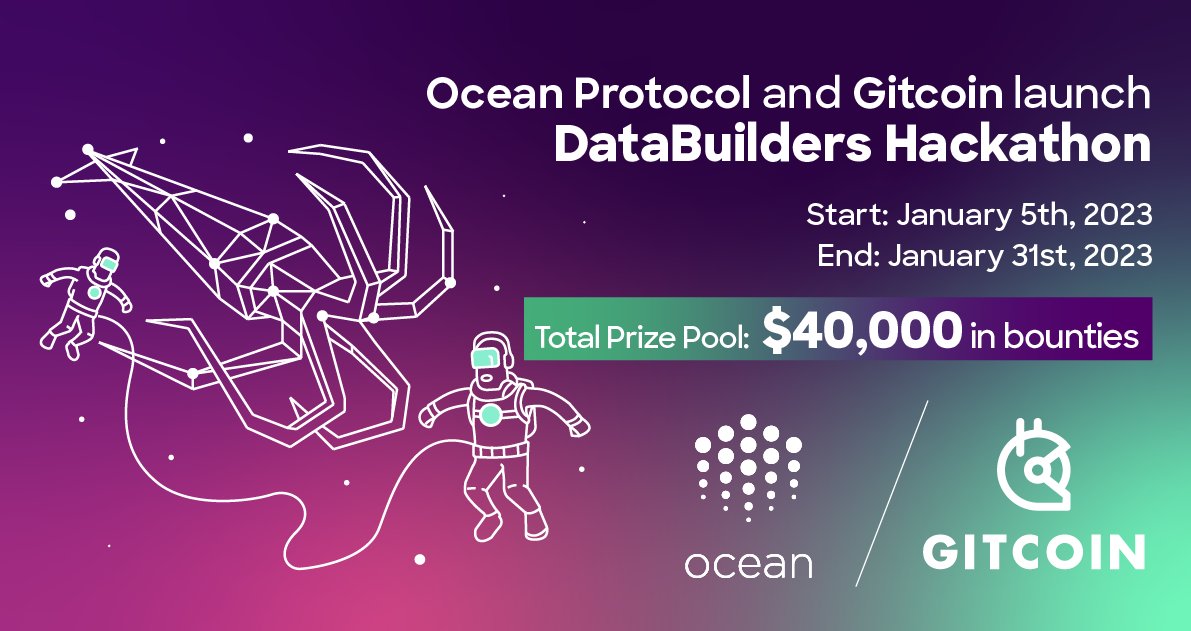 Ocean Protocol, the decentralized data exchange unlocking data for AI, joins forces with the Gitcoin-founded OpenData Community to launch the DataBuilders hackathon. The competition runs for 4 weeks, from January 5th through January 31st 2023, and offers contestants $40,000 in bounties to defend Web3 by fighting Sybil attackers and resisting re-centralization at the data layer.

Participants can download the recent Unicef, Gitcoin and Fantom public goods funding rounds data from the Ocean Market and leverage the Ocean technology stack to publish their algorithms as ERC721 and/or ERC725Y tokens on the available networks. Bonus points will be awarded for submitting your algorithms on Ocean Market or using Ocean’s data NFTs through one of the following first-class implementations.

Several other organizations are supporting the DataBuilders hackathon including Pocket Network, Supermodular, TrueBlocks, and a former OpenData Community hackathon winner, TrustaLabs. Contestants can learn more about the hackathon and register here.

Ocean Protocol is a decentralized data exchange platform spearheading the movement to unlock a New Data Economy, break down data silos, and open access to quality data. Ocean’s intuitive marketplace technology allows data to be published, discovered, and consumed in a secure, privacy-preserving manner. By giving power back to data owners, Ocean resolves the tradeoff between using private data and the risks of exposing it.

About the OpenData Community

The mission of the OpenData Community is to defend web3 from the related risks of Sybil attacks and centralization at the data layer. Current initiatives of the ODC include a Landscape of decentralized solutions including TrueBlocks and others, AMAs with project creators, how-to videos and FAQs, and hackathons such as the current DataBuilders hackathon. The ODC was founded in 2022 by Gitcoin and benefits from the expertise of Gitcoin data scientists and the support of the Gitcoin DAO and Gitcoin community.

The hackathon is a strategic initiative to engage the global data science community to defend Web3 from Sybil attacks and data centralization.