Battle Champs is a multiplayer arena battler on iOS and Android featuring the characters you have already come to love in Tennis Champs.  Synchronous battles with up to six players will challenge your strategic survival skills as you duck, hide, and blast your way to victory.  With tournaments, competitions, and RPG mechanics, planning the game is an exciting and high quality experience.

Make your own NFT character by selecting from a variety of characteristics, play styles, and appearances. To wear out your opponent, manage your stamina and direction of shots while playing. Win JRX prizes by winning, leveling up, and entering premium tournaments. 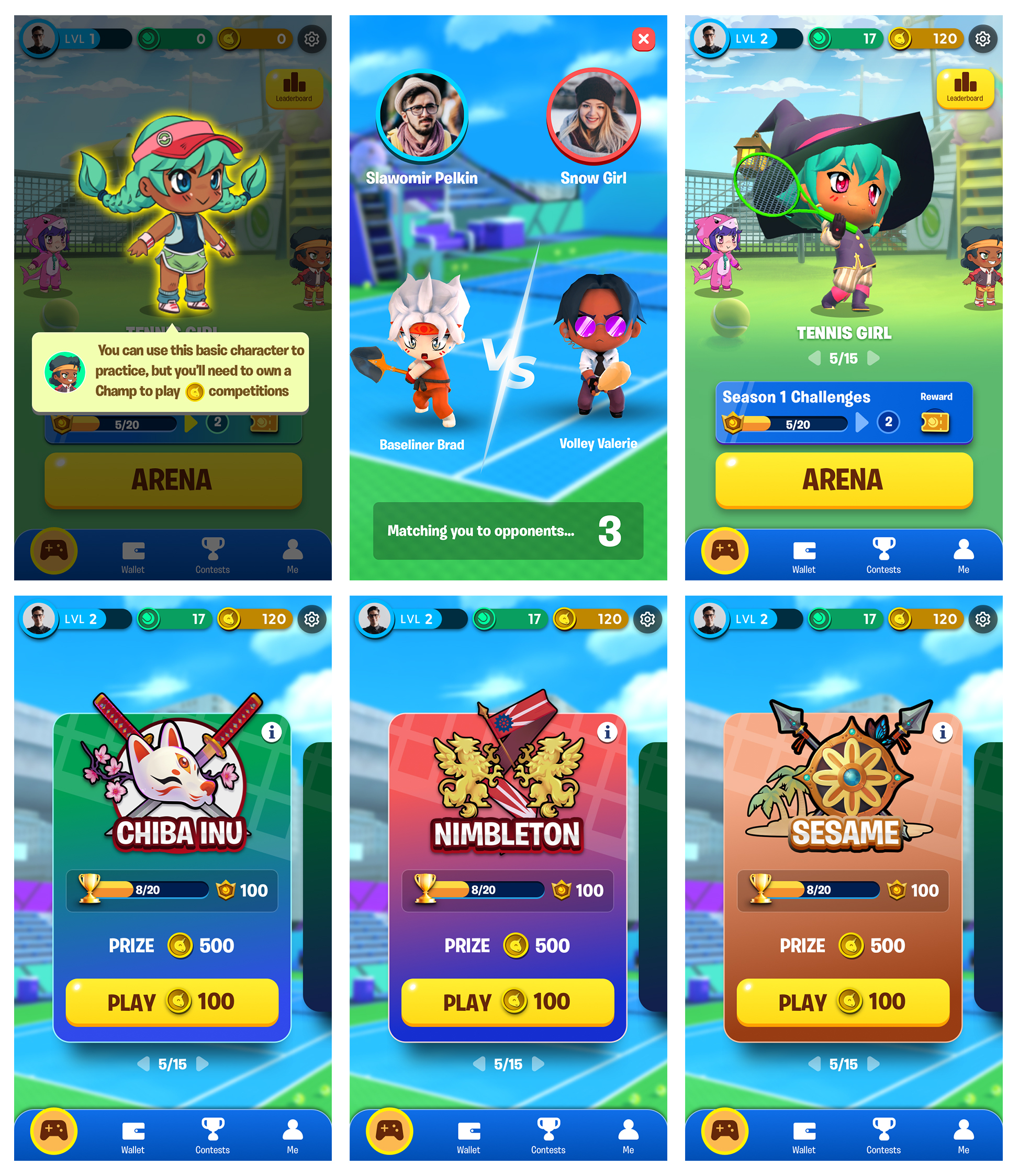 A Tennis Champs Genesis NFT with a unique set of features is included in each pre-reveal Blind Bag. There are 16 animations, face props, rackets, expressions, colors, and character traits to choose from. Each trait, such as character, animation, or facial prop, has various levels of rarity, resulting in one-of-a-kind and epic combinations for you to collect!
The Tennis Champs Genesis Series on Ethereum is the first set of characters to appear in the Champs metaverse's Tennis Champs game, earning them a blazing crown to signify their elite rank. The only Tennis Champions to wear the burning crown will be the Genesis series.
These owned NFTs can be upgraded and utilized in all game modes. For now, the initial buying stage has passed and there are no elite NFT characters left to buy. But there might be more before the game's complete launch or maybe just after the initial launch.

The Benefits of Tennis Champs Ownership

What role do Tennis Champs NFTs play in the game?

You can always play the game for fun with a practice character, but all gameplay that provides token rewards will require a Tennis Champs NFT.

What are the privileges of the Tennis Champs Genesis Series?

The Tennis Champs Genesis Series NFTs are unique Champs that are the privileged early entrants into the Champs metaverse. Initially, these Genesis Tennis Champs will recruit the NFTs required by players to play.

In addition, the Genesis Series are special and different in other dimensions:

Each of the 3,333 Tennis Champs Genesis Series NFTs are excellent PFPs with super stylish dance moves and a burning crown that sets them apart from all other NFTs, both as playable characters in the game and as badges of honor on social media.

Each Genesis NFT is also completely unique in appearance and gifted with a name that gives it individuality; the non-Genesis NFTs will have to earn the right to be named and are not necessarily guaranteed to be visually unique.

Tennis Champs Genesis Series holders get first shot at minting at least one NFT in any and all future NFT drops in the Champs Metaverse, including any “land” or other asset sales will be done in the future. This access may be through registered whitelisting, free mints, or discounted mints.

Genesis Series Champs act as passes through which blue-chip PFP holders (such as Nouns, Bored Apes, and other projects) can use their NFTs in Tennis Champs as well as in other future games in the Champs metaverse. This capability will only get more valuable as more projects and games are added to the Champs action and sports-game metaverse.

Tennis Champs Genesis Series NFTs are treated as VIPs across the game. Genesis Series Champs have special token-based tournaments reserved exclusively for them, giving holders an opportunity to earn and win even more tokens as compared to other players. These exclusive tournaments are also tied to season-based challenges, making it easier for a Genesis Champ to complete quests and unlock amazing token rewards each season.

The VIP treatment doesn’t just end with exclusive tournaments and seasonal challenges for exclusive rewards. Tennis Champs Genesis Series Champs will have more recruitment slots to generate Tennis Champ NFTs  as compared to the non-Genesis Tennis Champs, giving them unique advantages when it comes to recruiting more Champs NFTs to own or “rent”.

Are there benefits to owning multiple Tennis Champs?

NFT owners will be able to make use of Joyride’s NFT “rental” system, allowing them to lend their Champs to “scholars” for use in the game for shared rewards. With this economic infrastructure built into the Joyride platform and the Tennis Champs game, the more Tennis Champs that a person owns, the more the opportunities to benefit by “renting” them out to others!