GoodDollar has recently launched its basic income protocol (you can learn more via our White Paper and Lite Paper published here). This bug bounty challenge serves to stress-test the GoodDollar smart contracts. Successful submissions are at the discretion of the GoodDollar CTO, and will require evidence and documentation of any hack.

GoodDollar is a people-powered framework to generate, finance, and distribute global basic income via the GoodDollar token (“G$ coin”). Its goal is to provide a baseline standard of living and reduce wealth inequality through the creation of a universal basic income (UBI).

The severity of bugs will be assessed under the CVSS Risk Rating.

Any vulnerability or bug discovered must be reported only to the following email: Hadar@gooddollar.org

The bug must not be disclosed publicly or to any other person, entity or email address other than Hadar@gooddollar.org

Please include as much detail about the vulnerability as possible including:

To be eligible for a reward in the Gooddollar Bounty, you must:

All reward decisions, including eligibility for and amounts of the rewards and the manner in which such rewards will be paid, are made at our sole discretion.

People who are staking their crypto to Goodstaking, willing to accept G$ instead of the originally used crypto

For now - the interest can only be donated to the reserve, and no G$ is minted in returen

An automatic pricing formula which balances supply and demand for the Smart Token while holding a constant ratio between a Smart Token’s total value (market cap) and its connector token balances (see more here).

decentralized and autonomous entity, eventually owned 100% by the community of GoodDollar users.

a digital currency, built initially on ETH blockchain technology and comply with ERC20 standard, with a reserve token attached to it - Initially CDAI.

A smart contract that collects the total minted Gooddollar, and distributed between all claimers that day. 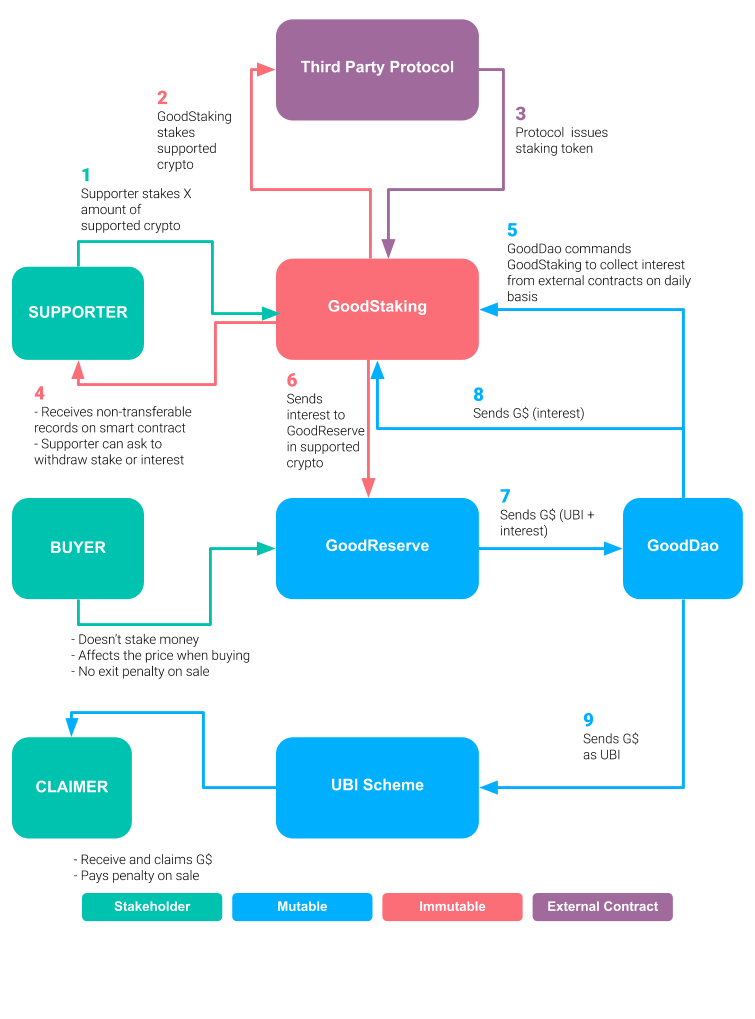 Money flow in the GoodDollar ecosystem

The identity contract controls which addresses are whitelisted to "Claim" UBI.

Currently the GoodDollar Foundation is whitelisting users based on user prooving he signed up with a live and unique face. Since the user facial details are anonymized in order to allow the user to create a new account in case he is unable to recover his wallet, facial details are deleted after authenticationPeriod and users are required to perform face verification again every authenticationPeriod days.

Each address is linked to the user public profile as created in the wallet. The DID is the node id in the public p2p GunDB database. Mappings from wallet address to DID are held in addrTODID

UBI Supporters can stake crypto which is then invested in DEFI protocols. The FundManager has permissions to collect gained interest from this contract.

The reserve mints G$ based on interest transfered from the FundManager, only the FundManager can trigger minting. The reserve also acts as the GoodDollar liquidity pool and AMM (Automatic Market Maker) and exposes methods to buy and sell G$s.

Has permissions to collect interest from the GoodStaking contract and permissions to tell GoodReserve to mint. Anyone can trigger the collection and minting process

Holds all the G$s that were transfered via bridge from the FundManager. The pool of G$s is divided daily by the amount of current active users. Each active user can then "claim" his quota. If a user fails to claim his quota it becomes part of the next day UBI pool.

Payments on the GoodDollar wallet are done via payment links. G$s are held in escrow and the recipient can retrieve the funds if he has the key. While the money is in escrow the sender can choose to cancel the payment and retrieve the funds. Based on Celo's payments contract

Helper contract for the GoodReserve.

Helper contract for UBIScheme. Manually funded by the Foundation to give 1G$ for "inactive" users when they claim. Since a new user (inactive) becomes active and eligible to claim UBI only in the next UBI epoch. So for new users not go empty handed on their first claim we give out a 1G$.

Helper contract for our backend servers to whitelist users and to fill their Fuse network gas.

Bridge contracts were developed by Fuse

DAO contracts were developed by DAOStack