Open source software is the foundation for coordination tools that will help humanity solve their toughest challenges. However, despite $500B+ in yearly economic output, developers have traditionally had no means to pay their rent while working on open source projects.

This is why team builts Gitcoin: A platform to fund builders looking for meaningful, open source work. They’ve pioneered Quadratic Funding, a novel, democratic way to fund public goods in their quarterly Gitcoin Grants rounds. Since its launch in November 2017, Gitcoin Grants has now provided nearly $16M of funding to public goods. This is in tandem with $3.54M in bounties which have been paid to open-source developers from all around the world. See for yourself.

They’ve had massive tailwinds because of the growth of the cryptocurrency industry as a whole. Bitcoin, Ethereum, and hundreds of open source crypto projects finally have funding built into their protocols. This has brought billions of dollars of funding to open source ecosystems for the first time in internet history. They think this has massive implications, many still unexplored.

Their mission struck a chord with the crypto community. They’re now seeing strong growth on all metrics across the board.

While this growth is great, Gitcoin needs to evolve with the developing web3 landscape. Today, Gitcoin allocates millions of dollars of funding to thousands of public goods projects. Tomorrow, Gitcoin will allocate billions of dollars and for that — team needs to be credibly neutral.

The DAO to govern Gitcoin

The DAO is the vessel for Gitcoin’s mission. It consists of community members coordinating to fund public goods, and introduces the Gitcoin token (GTC) to make decisions about where to allocate resources.

GTC is a governance token for credibly neutral developer talent and public goods funding, and the means to progressively decentralize the Gitcoin platform through the GitcoinDAO.

At inception, Gitcoin’s DAO will oversee a community treasury of GTC tokens, along with offering a governance framework for delegates (called Gitcoin Stewards) to participate in key ecosystem decisions such as fund allocation, matching pools, and grant collusion.

GTC is a fork of the COMP/UNI governance systems, built with a delegation prompt built into the retroactive claim process. Team hopes this flow will establish their DAO ecosystem with higher voter turnout than any blockchain-based governance system in the past.

The goal is to gradually introduce more formal frameworks for the ongoing development and maintenance of Gitcoin, as managed through on-chain voting.

In order to do this, they’re excited to welcome the Gitcoin token (GTC) into the world.

The Gitcoin token (GTC) is distributed to active participants in Gitcoin’s mission.

GTC has no economic value; it is a governance token used to oversee the Gitcoin ecosystem. It has no claim on financial rights.

Note: Please triple check the contract address when interacting with GTC. There are likely to be many malicious actors trying to leverage fake tokens to their benefit.

The intent of this distribution is to split GTC evenly between past and future contributors. 50% to those who’ve built Gitcoin so far (retro + stakeholders) and 50% to the builders of tomorrow.

15% of the GTC supply is being retroactively distributed to past users of Gitcoin.

This allocation is broken down as follows:

GMV – short for Gross Marketplace Value — describes any action in which value flowed through Gitcoin. This includes bounties, tips, hackathons, and grants. GMV allocations were split evenly between spenders and earners (50/50), meaning those who earned funds from Gitcoin split one bucket of GTC while those who spent funds (like donating to Grants) split another bucket. (all users capped at 2% in each respective allocation group)

On-platform actions refers to any user who:

A portion of tokens are reserved for members of KERNEL, to be allocated based on interactions and participation in Block I and Block II.

Projects who participated in the Funder’s League will split a GTC allocation. This was calculated by splitting total contribution amounts to the Funders League matching pool and issuing GTC pro rata.

To claim GTC, head over to quadraticlands.com and follow the instructions.

Users will be required to take a trip through Quadratic Lands to claim their tokens, and will be met by a request to delegate tokens to themselves or one of the Gitcoin Stewards as a first use of GTC.

Half of the GTC supply will be deposited into the timelock contract held in the Gitcoin DAO treasury, governed directly through on-chain GTC voting.

The address of the Gitcoin DAO can be found at gitcoindao.eth.

GTC allocated to the Gitcoin DAO will become available for distribution in equal monthly installments over the course of the next 2 years, meaning the full allocation will be unlocked by ~May 25th, 2023.

Gitcoin will utilize a fork of Compound’s governance framework, meaning all proposals feature a 1% minimum proposal threshold, a 2.5% quorum and require a 51% majority to pass.

Simply put, this means that in order for a vote to be proposed on-chain, the proposer must hold at least 1% of GTC tokens. In order for that vote to pass, at least 2.5% of the GTC supply must vote on the proposal with 51% of the votes in favor of the winning decision.

The remainder of the Gitcoin supply is allocated to stakeholders of Gitcoin Holdings.

This includes allocations to the team, investors, future employees and strategic partners of Gitcoin.  Anyone who has contributed to building Gitcoin in the past, from 2017 to 2021, is included in this allocation. This includes the core team who created the product, brand and market plus the investors who have funded the core team to the tune of $5mm (2017-2021) and $11.3m (2021 & beyond).

Their end goal is to build what team call the Quadratic Lands — a digital ecosystem where digital democracy reigns, and public goods are funded handsomely. In Quadratic Lands, team hopes to rewrite the rules of economic gravity and envision creating upward economic mobility for thousands of builders. Most importantly, Quadratic Lands is built by the community it serves – creating a positive feedback loop where everyday citizens are improving the digital communities where they live.

While Gitcoin DAO is an end in itself, it is also a means to another end: To chart a course to Quadratic Lands — a future-state where communities are empowered to build for the common good, and digital democracy reigns.

Quadratic Lands represents a destination where:

Consent of the governed is the only legitimate basis for governance. Gitcoin’s choice to decentralize their platform’s governance to a DAO will fully empower the community to govern itself. 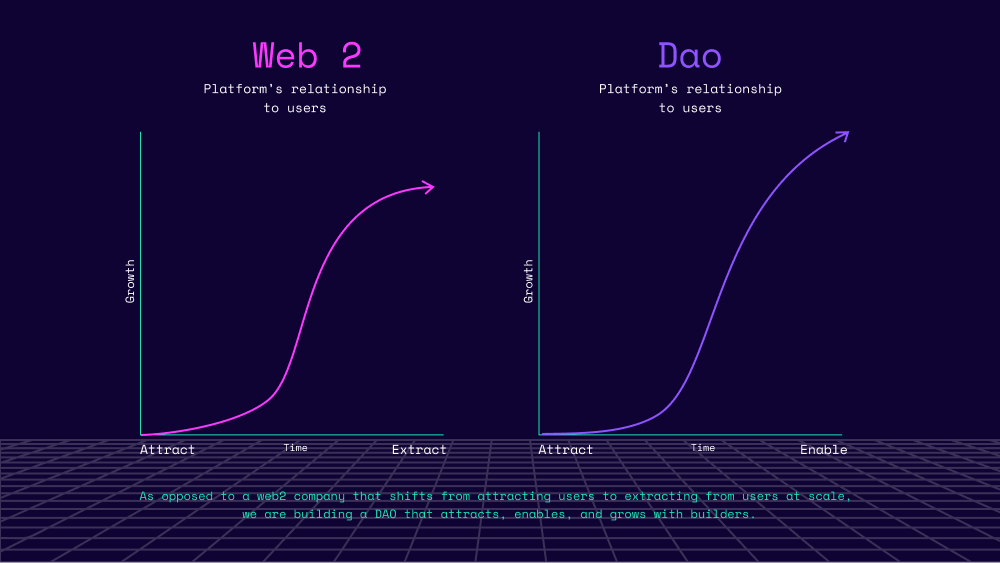 Now that products like Gitcoin Grants have become a cornerstone of the Ethereum funding ecosystem, it’s extremely important that its ongoing development be managed directly by and for the Gitcoin community.

The launch of Gitcoin DAO is the first step towards an ongoing evolution of Gitcoin. As team grows from millions to billions of dollars allocated to digital public goods yearly, it is important for this process to be accomplished alongside the community actually contributing to these  public goods. They want and need the community’s participation to ensure the impact these funds have are allocated in accordance with their collective goals.

In the coming months, team aspires to introduce new ways for GTC to influence sybil-resistance, grant curation, democratized open-source fund allocation, and create upward mobility for talented builders. For those keen to play an active role in making this future happen get involved in building Gitcoin DAO by joining them on Discord and finding an active workstream that resonates.

In the coming weeks, Gitcoin will release a suite of information on the finer details of all the above mentioned topics — none of which will be possible without the support of their community.

Until then, take a stroll through Quadratic Lands – your GTC awaits and the Gitcoin stewards are eager to earn your delegation.

In this post, team is excited to introduce the GTC token and our DAO that will govern Gitcoin — two crucial components allowing Gitcoin to decentralize and build an equitable protocol for funding open source development.