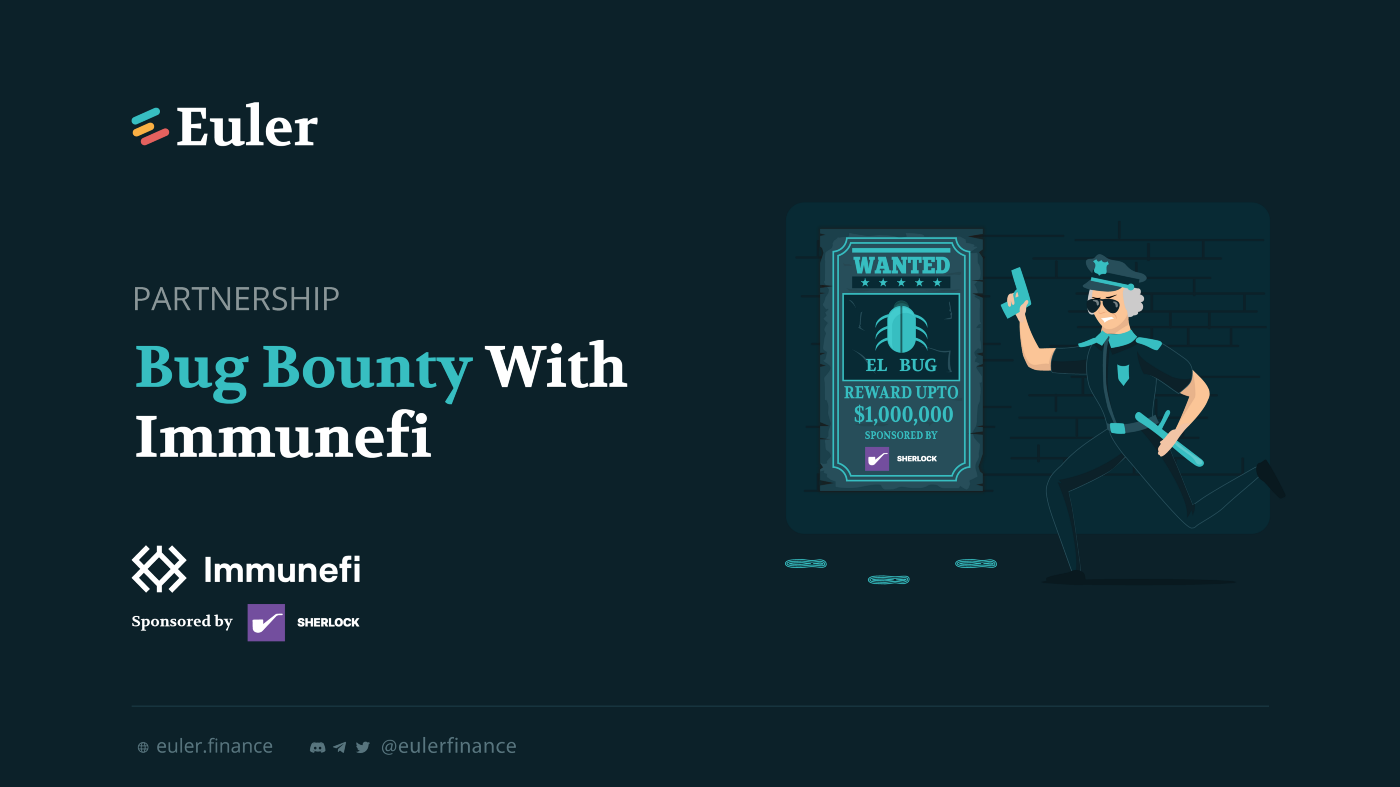 Euler is kicking off a $1 million bug bounty program with ImmuneFi as part of $10 million insurance partnership with Sherlock Protocol.

This initiative will center on covering Euler smart contracts and incentivise ethical reporting of potential security vulnerabilities or exploits. The new bug bounty program will go hand-in-hand with Sherlock’s $10 million smart contract coverage to advance the security of Euler.

The Euler team benefits greatly from Sherlock’s skilled security team (Watsons) and their experienced leadership as part of the first cohort of protocols during Sherlock’s guarded launch. Sherlock is a risk management platform built on Ethereum and designed to keep end users protected by providing affordable and scalable coverage to protocols.

ImmuneFi is the leading bug bounty platform that has already paid out over $10 million in bounties, having prevented over $20 billion in potential losses with around $78 million worth of bounties currently available. ImmuneFi is trusted by a number of DeFi protocols including The Graph, Nexus Mutual, Olympus and many others.

The bug bounty program will only cover the following exploits and focuses wholly on smart contract vulnerabilities:

The breakdown of the rewards are in accordance with ImmuneFi’s distribution criteria for the impact of the vulnerability, see here for more details.

Critical smart contract vulnerabilities are capped at 10% of economic damage, primarily taking into consideration funds at risk, but also PR and branding aspects, at the discretion of the team. However, there is a minimum reward of $50,000.

Critical payouts by Sherlock will only be paid out for critical bugs that would result in a loss of funds and can be executed profitably, and this then excludes Sherlock critical bounty payout for temporary freezing bugs.

Payouts up to $50,000 are handled by the Euler team directly and are denominated in USD. However, payouts are done in USDC. Payments above that have the remainder paid out by Sherlock with their bug bounty matching program and are done in USDC.

Eligibility & Out of Scope

Only certain exploits and ​​vulnerabilities related to Euler smart contracts are eligible for a reward. Additionally, only assets covered in the ‘Assets in Scope’ Table are considered as in-scope of the bug bounty program. The Assets in Scope Table can be found here.

The following vulnerabilities are not eligible for a reward:

The following vulnerabilities are excluded from the rewards for this bug bounty program:

The following activities are prohibited by this bug bounty program:

For more information and details about the programme, please visit ImmuneFi’s Euler page and check out their Twitter announcement.

Euler is a capital-efficient permissionless lending protocol that helps users to earn interest on their crypto assets or hedge against volatile markets without the need for a trusted third-party. Euler features a number of innovations not seen before in DeFi, including permissionless lending markets, reactive interest rates, protected collateral, MEV-resistant liquidations, multi-collateral stability pools, sub-accounts, risk-adjusted loans and much more.

The ImmuneFi Bug Bounty program aims to strengthen Euler’s security while boosting collaboration with the greater DeFi ecosystem as part of insurance partnership with Sherlock Protocol.