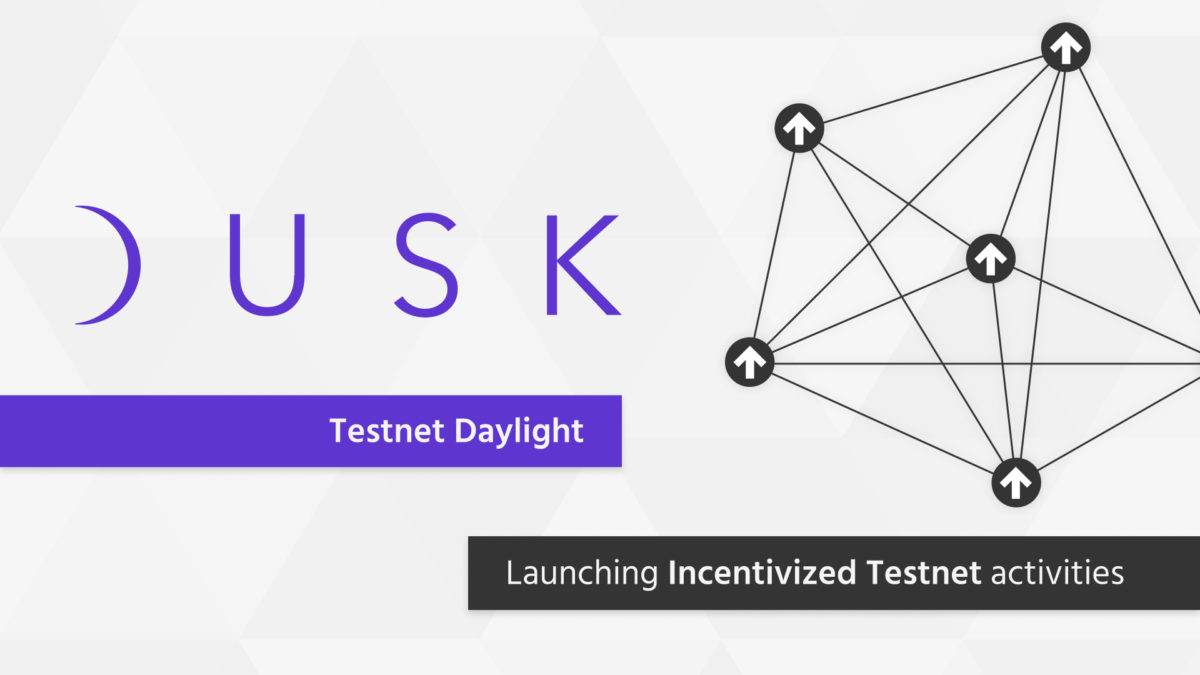 As Dusk Network’s protocol evolves towards the next phase of Testnet, unique opportunities arise for those passionate enough to get involved in the process. The rolling Incentivized Testnet will be accompanied by a multitude of initiatives, each adding to the security of the network and opening the doors to compensation for participants but also educating the community on what is required to be a participant within the Dusk Network protocol. If you’re looking to spend your time strengthening the financial framework of the future while racking up rewards, keep reading to find out more.

Rolling Incentivized Testnet is a sign of things to come; a crash test dummy version of the final mainnet. Its sole purpose is to be pushed to its absolute limits, every nook and cranny patched and rendered waterproof to prevent any unwanted behavior, incompatibilities, or openings for exploitation. This testnet is the mold that dictates the shape of the mainnet. There can be no room for errors. That’s where the incentivization comes in.

A campaign such as the one mentioned below is part of the incentives that ensures testnet is properly stress tested. It represents an invitation for all those who are technically inclined to go in and set up their first Provisioner Node on the testnet. Furthermore, it is an opportunity for long-term supporters to actively participate in the security of the testnet by running a provisioner, thereby verifying blocks as they’re created.
The activities outlined in this post will be the bedrock for the launch of the Incentivized Testnet, but they are not the end of the story! Expect more opportunities, like Learn 2 Earn campaigns, hackathons, and bug bounty programs in the later stages of the Dusk Network rolling ITN.

The launch of the rolling ITN will positively impact testing KPIs, efficiency in disseminating upgrades to the Dusk protocol, and even the fairness of Dusk token distribution. Dusk Network believes that the introduction of incentive mechanisms consistent with the mainnet will ultimately benefit the consensus timelines and educate the community.

To be able to participate in the first phase of the rolling ITN, a technical understanding of running and setting up nodes is required. A step-by-step guide is provided below to get you started!In addition to technical knowledge, there are also some hardware requirements to run a node. To successfully run a node the following basic specs are required:

The node can be set up on a basic server (eg. DigitalOcean or Vultr) or a home setup.

How eligible participants will be defined?

To be eligible to receive part of the 100k DUSK Reward Pool, participants will have 2 weeks after this announcement(grace period) to set up a Provisioner Node and have it up and running before December 1st. From then up until December 31st, the node will have to be running for a minimum of 75% of the time, to be eligible to accumulate rewards. Rewards will be calculated after this period and distributed to the wallet address provided by the node operator.

The grace period for the first iteration will be 2 weeks, this means participants will have 2 weeks to set up their node. To provide all participants with an equal chance to earn a part of the reward pool, during this grace period no rewards will be allocated. The period over which the rewards are calculated starts on December 1st, 2022 and will last until December 31st, 2022. After this period, the team will share the results of this first phase and use the findings to further improve the network.

The focus of Phase I is to educate community members on how to operate a node, start building up a knowledge base and discover any weakness in the current stack.

Timeline: The onboarding period is from November 15th to November 30th, nodes need to be active from December 1st to December 31st.

Phase II emphasizes all technological advances we’ve made over the last year and continues our education and improvement cycle.

During Phase III Dusk wants to test its economic model in a less controlled environment that is close to mainnet in design. Stakes on Ethereum will give an equivalent amount issued on this testnet. The rewards accumulated during this phase will give provisioners (relative) equivalent amounts on Ethereum. This will open the way for many strategies to be applied on this testnet that will see users optimize their strategy to earn as much Dusk as possible in this phase.

Achieving the goal of having 100+ node operators will make Dusk Network TestNet more decentralized than 50% of all current up-and-running networks in the world. This marks another big step towards the decentralization of Dusk Network.

How to get involved

To set up your own node, check out the Step-by-Step Guide. If you’re interested in participating, be sure to follow Dusk blog and Dusk official Twitter account, or get involved with other participants on Dusk Network Discord channel in the dedicated ITN Thread.

Dusk Network is the privacy blockchain for financial applications. A new standard for compliance, control, and collaboration. Dusk mission is to enable enterprises of any size to collaborate at scale, meet compliance requirements and ensure that personal and transaction data remains confidential.

Dusk Network Incentivized Testnet is now live. You can start setting up your own node and start securing the network to earn reward for your contribution.