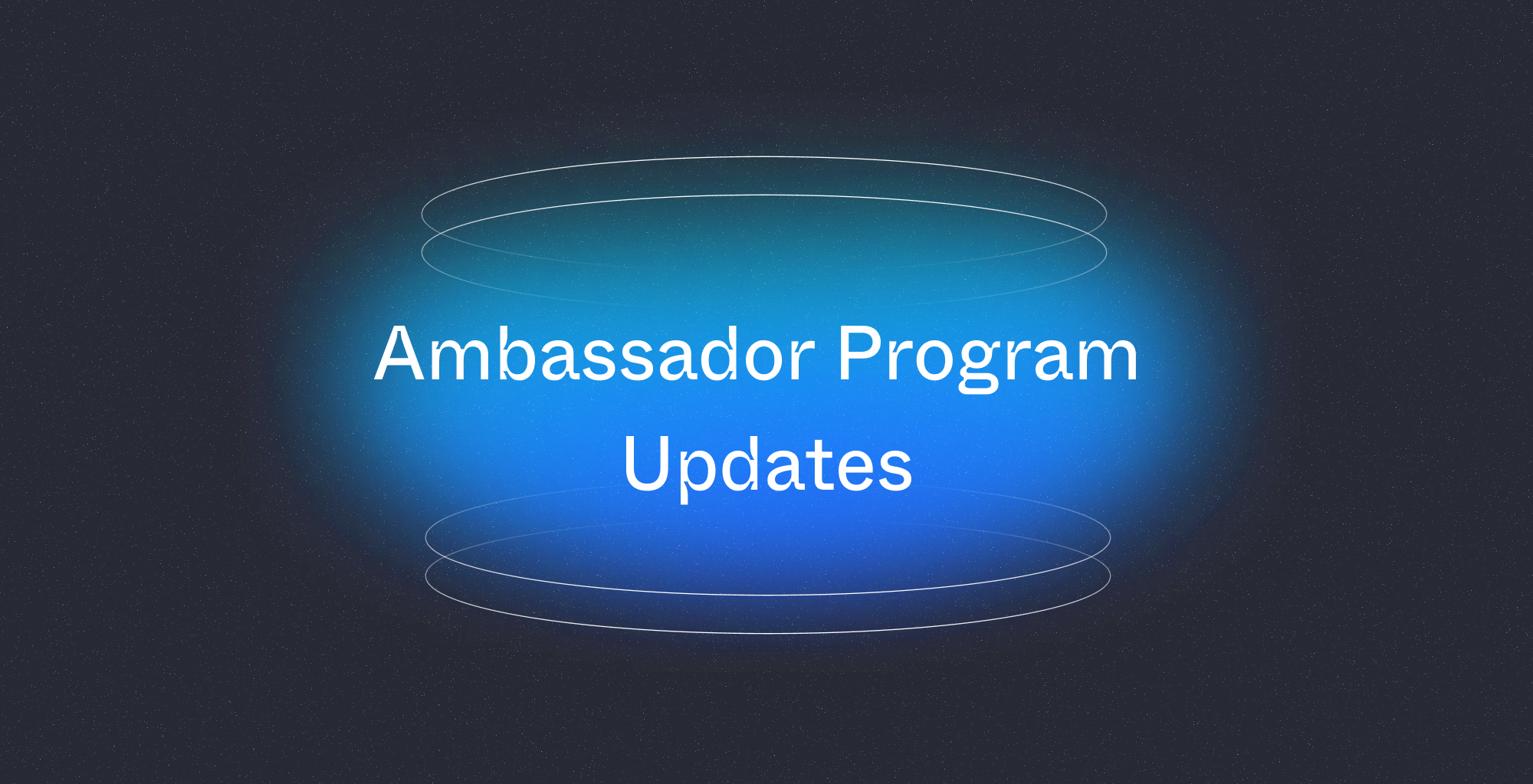 With the third round of ambassadors, Aleo is introducing a third group: the voyagers. Think of the voyagers as the “golden apprentices.” They create very high-quality content, plan & host Aleo meetups, and actively participate in the community. An ambassador can only become a voyager if they are first an apprentice. Similarly, an ambassador can only become a maestro if they are first a voyager.

The Aleo Points Table (below) is what will be used for task-to-point conversion.

Note that Aleo Points have NO inherent value. 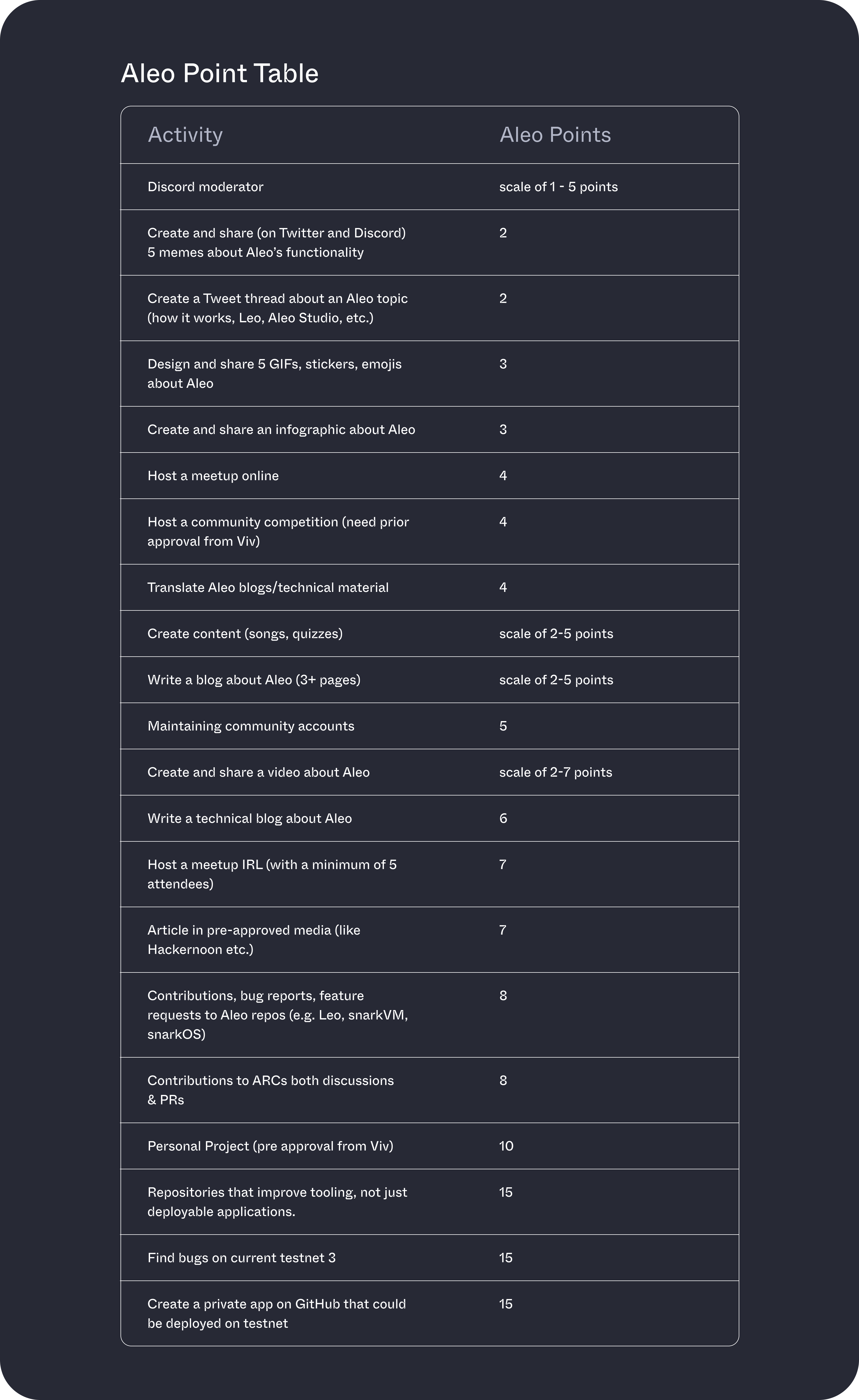 Previously, maestros accumulated 50 Aleo Points each time starts a new ambassador round. Apprentices earned 25 points per round if they completed the two tasks.

Aleo is completely revamping the process behind Aleo Points in an effort to be decentralized and transparent.

Each month, if a maestro completes their requirements of verifying all apprentice work, moderating their respective language channels, and maintaining their Aleo-related projects, they will collect 50 Aleo Points.

Each month, apprentices will need to collect a MINIMUM of four points to keep their apprenticeship. If an apprentice does not uphold this, they will be removed from the program (though they will still have the Aleo Points they accumulated to date). Apprentices’ activities will be reviewed by a maestro and checked for quality. Apprentices can collect a MAXIMUM of 30 points in one month. Keep in mind that the more activities created for points, the higher the bar will be for the quality of each activity, and maestros will be able to dismiss work if they think it is poor. Quality is very important.

For an apprentice to move to the voyager status, they must accumulate 30 Aleo Points for two consecutive months. In other words, each month for two months in a row, they will need to collect 30 Aleo Points (60 points at the end of the two months).

For a voyager to maintain their ambassador status, they will need to collect a MINIMUM of eight points per month. If the number they collect (x) is greater than or equal to four but less than eight, they will be demoted to apprentice. If it’s under four, they will be removed from the program (but they will keep the Aleo Points they accumulated to date). Their activity will also be reviewed by maestros and checked for quality. The MAXIMUM that a voyager can collect per month is 40 points. To become a maestro, voyagers must accumulate 40 Aleo Points in three consecutive months. In other words, they will need to collect 40 Aleo Points each month for three straight months.

IMPORTANT TO NOTE THAT ONLY AMBASSADORS CAN COLLECT POINTS. Aleo will hold new rounds of the ambassador program throughout Testnet 3 but the number of rounds and the exact dates are not yet known.

Aleo team has been so impressed with the time and energy that the community has put into Aleo. With this new points system, Aleo will be rolling out a leaderboard on the Discord as well. Any questions, please ask in Discord.

Since the initial launch of the Aleo Ambassador Program in March 2022, the project welcomed 157 Ambassadors in total, divided into two levels: 34 in the maestro group and 123 in the apprentice group. The Discord grew by 6000 new accounts. When Aleo first launched the Ambassador Program, the goal was to sort through the community to find the people actively creating the best Aleo content. With the official launch of Testnet 3 and new Aleo features on the horizon, the team decided to change some things about the ambassador program to be more transparent and convenient for ambassadors.